The update of regulatory framework in the field of fire safety and the design of fire extinguishing systems affects both the objects under construction and the existing facilities. Already now reconstruction and technical re-equipment of oil and petroleum products warehouses (hereinafter referred to as oil depots) is taking place. These include tank farms, loading railcar racks, product pumping stations, consumable warehouses, storage warehouses for packaging products and other facilities that were equipped with fire extinguishing systems in the past decades according to the regulatory requirements of the 70-80s.

The subject of equipping industrial facilities with modern fire extinguishing systems is a relevant one because the rules for confirming product compliance with fire safety requirements have changed. As new standards enter into force, demand for effective fire protection systems will only increase.

The article discusses differences between the oil depot fire extinguishing technologies, which were used in Russia in the 70-80s and at present, since about the 2000s. Pozhneftehim, a Russian manufacturer of equipment and foam concentrates for foam and water fire extinguishing systems, comments the modern solutions for the integrated protection of oil storage areas and other production facilities. 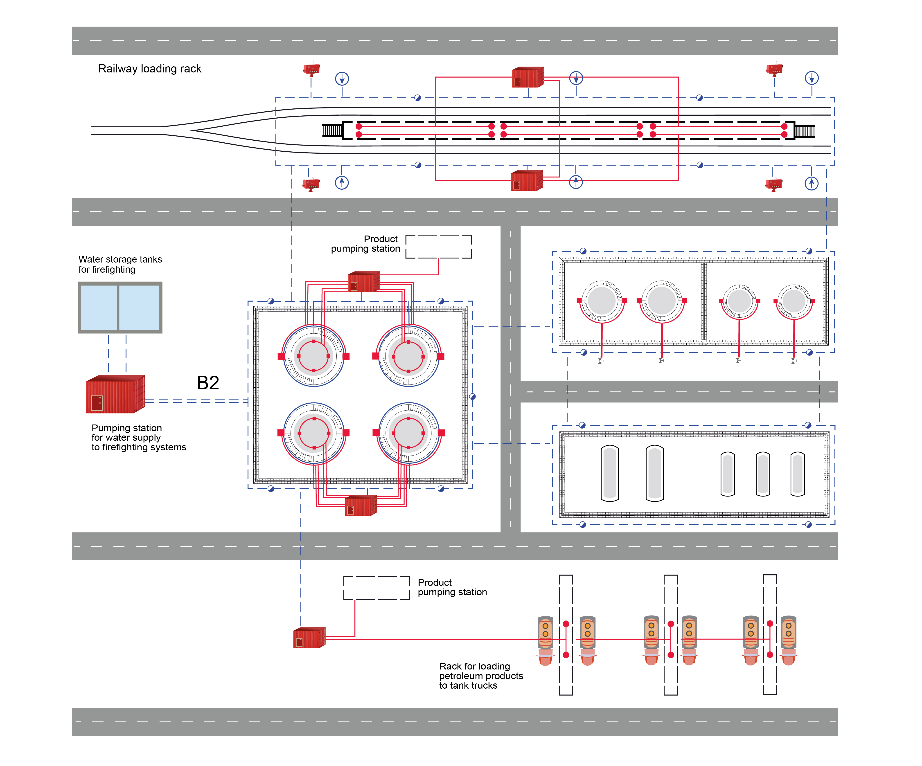 The common problems of fire protection and fire extinguishing systems of oil tanks, railcar loading racks, product pumping stations, buildings and premises as part of oil depots and oil refineries are as follows:

The reconstruction of security systems at oil depots and oil refineries by recovering operability of active fire protection systems may cause difficulties. When expanding facilities, questions also concern the possible use of existing fire extinguishing systems’ capacity for new facilities.

We continue by considering modern effective fire extinguishing systems in comparison with the "classic" systems of the 70-90s at objects which form part of oil depots.

According to SP 5.13130.2009 (Table A.2) and SP 155.13130.2014 (paragraph 13.2.3), the oil tanks for ground storage of flammable and combustible liquids with a volume of 5000 m3 or more must be equipped with automatic foam fire extinguishing systems. The latter consist of a foam station with a foam concentrate storage and dosing system (SKhDP or bladder tank) and low expansion foam generators, such as Vega KNP, which supply the fire extinguishing substance to the fire source. 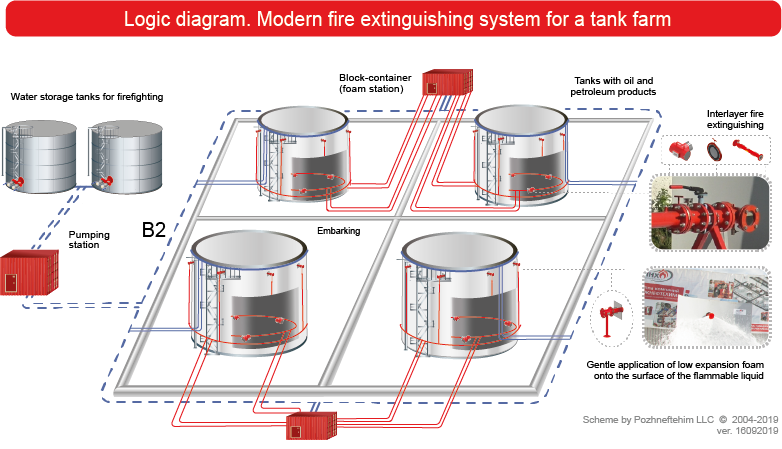 AFFF, AFFF/AR, AFFF/AR LV foam concentrates form an insulating film (foam blanket) on the surface of the oil product, which gives burnback resistance and protects against explosions. Therefore, they are used for effective fire extinguishing of especially dangerous industrial facilities with storage and handling of flammable and combustible liquids. In addition, the effectiveness of the AFFF, AFFF/AR, AFFF/AR LV foam concentrates is demonstrated during the annual Advanced Courses of Pozhneftehim.

The Vega low expansion foam chamber is designed to extinguish fires in tanks with highly flammable and combustible liquids. With minimum overall dimensions, the width of the foam fan when installed at a height of 2.5 m is at least 12 m, and at a height of 6 m it is at least 15 m. The low expansion chamber includes a sealing element that eliminates the presence of oil vapor inside the foam chamber. The design of the generator also provides for the possibility of testing without removing the KNP from the tank.

Interlayer fire suppression is recommended for tanks with a volume of 5000 m3 or more. The decision to choose the technology of foam supply into the fuel layer should be taken considering the type and viscosity of the oil product. The reason why this fire extinguishing method is recommended for use is the likely destruction of the upper belt of the tank in case of explosions (tank fires sometimes start with explosions). As a result of an explosion, the entire system for fire extinguishing on the surface of the oil product may be destroyed. Another reason is the likely partial collapse of the tank lid, as a result of which the foam that will be supplied from above will not reach the source of ignition.

The Shturm high-pressure foam generator, the Interlayer nozzle and the burstable membrane are used in modern system of interlayer fire suppression. The suitable fire extinguishing agent is the film-forming low expansion foam, which is obtained from AFFF foam concentrates. The standard intensity for the supply of foam solution into the layer is indicated in SP 155.13130.2014.

In addition, according to paragraph 13.2.8 of SP 155.13130.2014, the tanks are equipped with stationary cooling units with manual start. In the upper zone of the tanks, irrigation rings are installed. The Fire monitor complex (LPK), consisting of a fire tower, a fire monitor and a water-film screen can be used for water cooling of tanks (burning and adjacent to burning) in some systems.

Tank farm fire extinguishing: the “classic” system as in the 70-80s

The main difference between the classic and the modern systems is the extinguishing method. Previously, the fire suppression systems for flammable and combustible liquids usually required the medium expansion foam. This can extinguish fuels provided that the type of foam concentrate is selected correctly and the entire fire extinguishing system is operable. However, it does not give burnback resistance, nor protects against explosions.

The previously widespread GPS and GPSS medium foam generators are still present at hazardous industrial facilities. They have an attractive price. Nevertheless, practice shows that they do not withstand the effects of an open flame (the grid quickly collapses from fire). In addition, tests demonstrate that the GPSS generator does not convert part of the premix into the foam. Therefore, flow errors occurs, which may lead to ineffective foam attacks.

At present, medium expansion foam continues to be used. However, to guarantee the effectiveness of a foam attack, you need the foam concentrate produced strictly according to GOST, the system must not have filled foam pipelines and the foam generators must be resistant to open flame at least during the response time of the system (the supply of extinguishing agent must begin in within 3 minutes).

SP 155.13130.2014 governing the loading and unloading railcar racks specifies the use of stationary (non-automatic) foam fire extinguishing installations. The latter include a pumping station, a foam proportioning system with a foam concentrate storage and dosing system, a system of distributed foam pipelines (not filled with a foam concentrate solution), and low expansion foam generators. 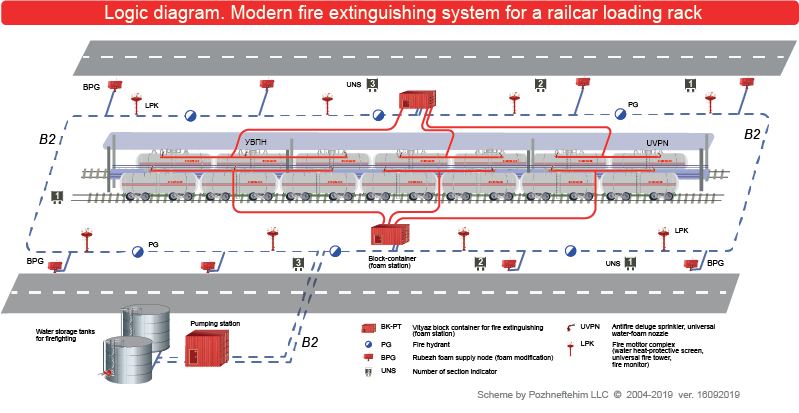 Reliable thermo- and explosion-proof special deluge sprinklers should be used as foam generators. Pozhneftehim manufactures the Antifire special deluge sprinklers (universal water-foam spray nozzles) designed specifically for supplying low expansion foam to the source of ignition at highly dangerous explosive objects. The deluge sprinklers withstand temperatures from minus 60 to plus 800 °C, are resistant to aggressive environments and can be equipped with oscillators to increase the irrigation area.

Stationary fire monitors are envisaged for fire protection of fuel transfer railway terminal (SP 155.13130.2014, clause 13.2.8). Pozhneftehim offers a integrated solution for remote cooling, the Antifire fire monitor complex (LPK) with a water screen. The application of LPK is regulated in accordance with paragraph 13.2.15 of SP 155.13130.2014.

Foam supply units are installed along the flyover every 120 meters (paragraph 5.1 of the VUP SNE). The Pozhneftehim equipment line has an effective solution, the Rubezh fire hose cabinet (BPG) for extracting water from ground fire pipelines and producing the foam solution for external firefighting. The Rubezh BPG for cold climate territories may have electric heating for pipelines, foam concentrate tanks, as well as a compartment for fire hoses.

Fire extinguishing of railcar loading racks: the “classic” system as in the 70-80s

At the end of the 20th century, fire extinguishing systems for fuel transfer railway terminals were equipped with GPS or GPSS generators. The medium expansion foam generators of this type are not heat-resistant and not explosion-proof. In addition, they are not equipped with oscillators. Therefore, when extinguishing tanks with flammable and combustible liquids, it is not guaranteed that the extinguishing agent enters directly into the neck of the tank.

Medium expansion foam obtained from the synthetic concentrates of S type is not suitable for extinguishing polar and mixed liquids. This is demonstrated at the Advanced training courses of Pozhneftehim, as we annually conduct fire tests with the extinguishing of flammable liquids by different types of foam concentrates. For effective fire suppression of highly flammable and combustible liquids of any type, modern film-forming foam concentrates of the AFFF/AR type and special Antifire deluge sprinklers are used.

It is recommended to install modern fire extinguishing systems with low, medium or high expansion foam in warehouses, warehouse buildings and premises with storage and circulation of highly flammable and combustible liquids. Both synthetic and fluorosynthetic foam concentrates are acceptable. The choice of foam concentrates and equipment depends on the fire extinguishing technology and fire hazard of the facility (combustible material, water supply and other characteristics of the facility).

The logic diagram shows the components of the firefighting in general. Additional information on firefighting systems at warehouses is available on the Pozhneftehim website. 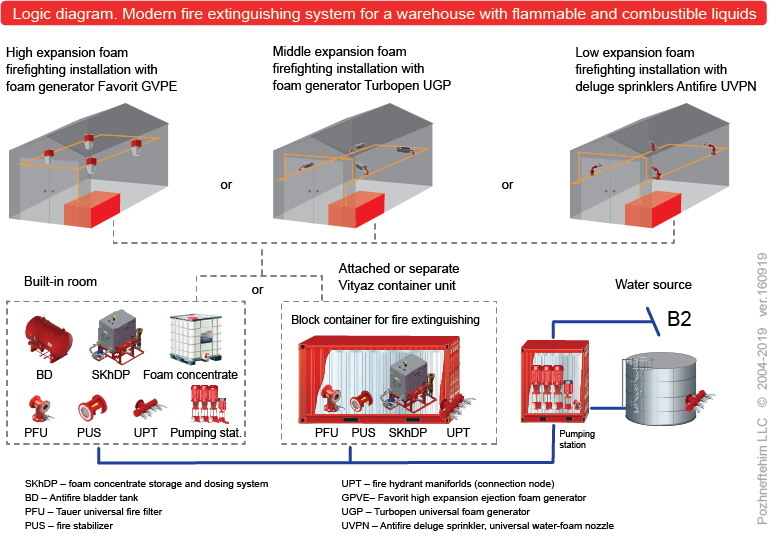 The introduction of a modern integrated fire protection system for a warehouse, a product pumping station and other premises as part of tank farms involves the development of a concept with the rationale for a suitable firefighting method. You can contact the specialists of Pozhneftehim for the development of the Fire Protection Concept.

The automated on-spot loading station (AUTN) is an automated technological facility for filling rail car tanks with liquid hydrocarbons in on-spot mode with movement of tanks for filling by a special shunting device which is an integral part of installation.

Production of equipment for firefighting systems

The update of regulatory framework in the field of fire safety and the design of fire extinguishing systems affects both the objects under construction and the existing facilities.

Water fire fighting is the most common way to extinguish fires.