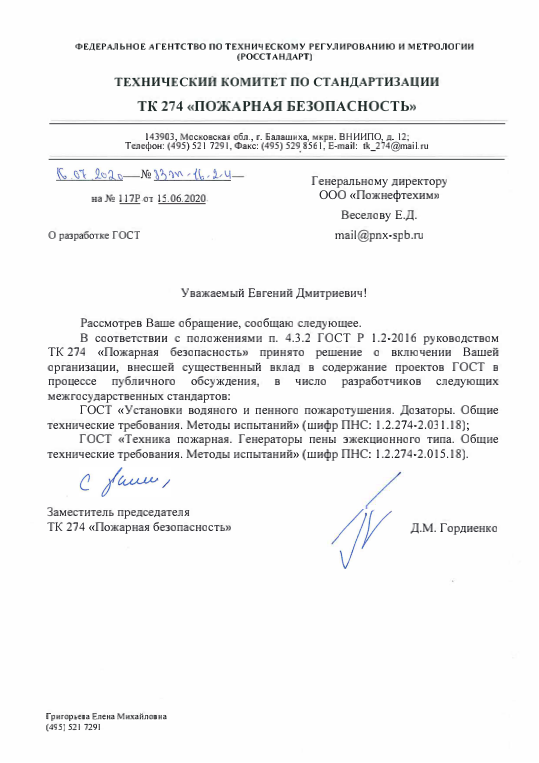 In 2018-2020, Pozhneftehim was heavily involved in the development of GOSTs for ejection-type foam generators and proportioners for water and foam fire extinguishing installations. On July 16, 2020, for contribution to improving the newly prepared regulatory documents, the company was officially granted the status of a co-developer by the decision of the Technical Committee for standardization TC 274.

The letter of the Technical Committee for standardization TC 274 "Fire safety" to LLC Pozhneftehim notes that the company is included in the developers list of interstate standards for "significant contribution to the content of GOST projects in the process of public discussion", in accordance with the provisions of paragraph 4.3.2 of GOST R 1.2-2016.

As part of the work on the draft version of GOST "Firefighting equipment. Ejection-type foam generators. General technical requirements. Test methods", Pozhneftehim has prepared and sent to the developer VNIIPO EMERCOM of Russia a review with 32 proposals, of which 29 were accepted or partially accepted. The working version of the document is available here.

As part of work on the draft version of GOST "Water and foam fire extinguishing installations. Proportioners. General technical requirements. Test methods", Pozhneftehim has prepared and sent to the developer VNIIPO EMERCOM of Russia a review containing proposals for the main requirements of the standard and schematic diagrams describing the principles of testing the main types of dosing devices. According to the report on the final draft, 13 proposals from Pozhneftehim LLC were accepted or partially accepted. The information about the draft GOST on proportioners for fire extinguishing installations is available here.

"Pozhneftehim plans to continue the active participation in the development of new interstate standards. Currently, we are developing 6 GOSTs with the Academy of the State Fire Service of the EMERCOM of Russia. We believe that our company's experience in the field of fire protection of industrial facilities since 2004, which reveals itself in regulatory documents, allows to significantly influence the quality of products in the EAEU countries," said Sergey Panov, Deputy head of Pozhneftekhim group.

Pozhneftehim, the Russian manufacturer of products, developer of STU and design solutions for industrial fire extinguishing systems, has been a member of TC 274 since 2017. The Technical Committee for standardization is an association of Federal executive authorities, scientific and industrial organizations and enterprises; the TC 274 Secretariat is entrusted to the Federal state budgetary institution VNIIPO EMERCOM of Russia.

Pozhneftehim, the manufacturer of fire extinguishing systems and developer of design documentation for fire safety of industrial facilities, has prepared Special technical conditions for the EVRAZ facility in the Tula region. The STU has passed necessary approvals in state bodies.

Pozhneftehim, a large Russian manufacturer of equipment and foam concentrates for fire extinguishing systems, continues to implement the strategy of lean manufacturing and optimization of production processes.

Reference of CC-7 on finalized works with Pozhneftehim Group

Pozhneftehim has received one more positive reference from customer. Specialists of the China National Chemical Engineering